Skip to content
Purchase over $60 for Free Shipping | Due to COVID-19, delivery service may be delayed

A Doodle A Day: Google Doodles’ role as a creative calendar

A Doodle A Day: Google Doodles’ role as a creative calendar

If a picture paints a thousand words, then its no surprise that every Google Doodle tells a rich story on its tiny, on-screen canvas. With over 2000 doodles created in the past 18 years, that’s a whole lot of stories that have been told. And perhaps, it was the very first Google Doodle that has the strangest story of all: it was conceived in 1998, when founders Larry and Sergey decided to do the unthinkable — modify their corporate logo! The pair decided to place a stick figure in the Google logo as a fun way to let users know that they were “out of office” attending the Burning Man Festival.

The doodle soon evolved into playful illustrations that marked famous birthdays, notable discoveries and inventions, as well as significant events. Every country could have its own doodle on any given day, so the Google Doodle team had to evolve from a one-man operation to a small but agile of designers and engineers, who often juggle multiple doodle assignments from all around the globe.

But its quirky premise aside, let’s explore what the Google Doodle means to its users as well as the tech and creative industries. Google Doodles are, if you will, a new-fangled history book for a new generation of people who turn to Wikipedia instead of encyclopedias. Not only does each decorative logo utilise a wide variety of art styles, they all celebrate events and anniversaries around the world, ranging from the cool (30th anniversary of Pac-Man) to the obscure (101st birthday of Hedy Lamarr). What binds them all though, is that they all endeavor to connect people to the technology which they use, in a beautiful and humanising way.

These doodles give personality to the faceless search algorithms and results that is Google’s bread and butter. It gives people an emotional and educational reason to return day after day. How many of you would ever know who Marija Juric Zagorka is, let alone know that she would have celebrated her 143rd birthday if she were still alive? Even for native Croatians, this little fact might have been buried under terabytes of data. For creatives seeking inspiration, these nuggets of information and history can mean a world of difference in answering a brief, or finding that spark to an idea.

It’s pretty absurd if you think about it — we don’t have time to actively remember all these different cultural markers and makers in real life, but are constantly being reminded of them virtually through Google Doodles and apps like Uber. We might not celebrate these occasions or people in the real world, but we readily interact with them on Google’s homepage through a doodle.

And it all lasts for a day. Despite the months of preparation and research that go into creating each doodle, the ephemeral and transitory nature of each Google Doodle is perhaps the best reflection of our click-and-refresh digitally-led lives. We are the bored desk-bound workers and procrastinating students who find a breath of creative fresh air whenever a doodle pops up on the Google home screen, but its freshness only lasts till the next day, before finding ourselves needing another new doodle to be occupied with. 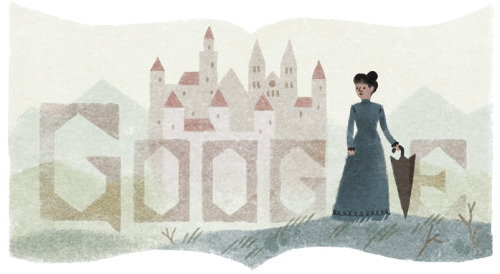 Be a child and find curious things in life

Inspiration: Kick Away the Monday Blues!

Be Wild And Free with Katie Vernon